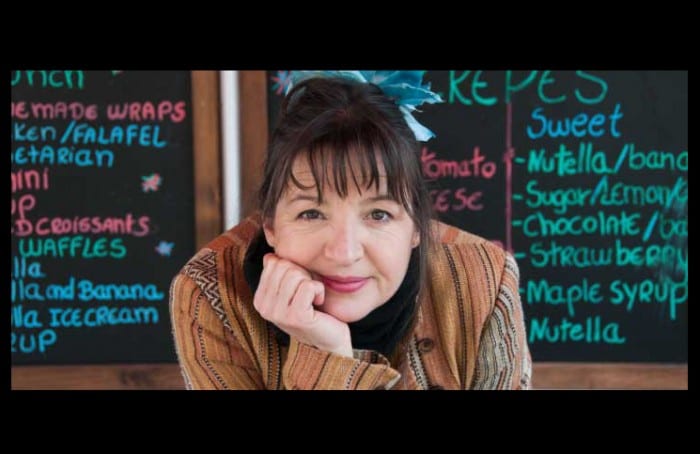 How do you pronounce your name?
Her–le–hee. There used to be an O’ at the start but we lost that many moons ago.

What or who is Hot * Flush?
I got the idea to do a dance class in 2009. I sent out 20 invitations to my friends and all 20 came back saying, yes please, we too want to dance. We range from 45 to 70, hence the name. The menopause is a taboo subject but I scream it from the rooftops. You can lose a bit of your libido during the menopause but everyone wants to feel great and exercise is a good way of getting it all back. Movement is an essential way to do this. Four of the group have had breast cancer, which is an incredibly high proportion. We had to do something. Why not a show? None of the girls have danced professionally before but all of them love it.

What’s the show in aid of?
The Breast Cancer Haven in Fulham Broadway, a church that’s been changed into a sanctuary where women with breast cancer can take some time for themselves to recharge the batteries. They can get advice on alternative diets and treatments such as acupuncture. It’s all free.

When’s the show?
It’s a one-off on Friday, 28th March at the Bush Hall on Uxbridge Road. We’ve been rehearsing for months. I’ve choreographed it with Molly Molloy who taught Arlene Phillips. Molly’s amazing. She’s in her 70s and is brighter and fitter than all of us put together. She’s choreographed a number, but it’s not all dancing. It’s a full show with DJs and singers and comediennes, plus a poet, Ant The Rant, who’s doing a poem about the male menopause.

Will Hot * Flush perform again?
I want Hot * Flush to perform on ‘Strictly…’. I know Bruno Tonioli. He’s endorsed us, but he can’t make our show because he’s judging in America. But Craig Revel Horwood will hopefully be there. I want to get everyone dancing. All ages. When people dance and let themselves go, they’re so happy. It’s such a great tonic for our well being.

What brought you to the village?
I was living in Shepherd’s Bush and happened to be going down Hammersmith Grove when I realised I just wanted some trees in my life.

How old were you when you first danced for Hot Gossip?
17. I was in it for 5 years.

Why not ballet?
I desperately wanted to be a ballerina, but I was born with my feet “turned in”, I was pigeon-toed. Dancers have to be “turned out” so I had leg irons to make them straight. I auditioned for the Royal Ballet, but they said I wasn’t made correctly from the waist down. They said my top half was perfect though and that I was extremely musical.

Are you a team player or do you prefer being a solo artist?
Definitely a team player. I’d rather be at the back. I always push other people forward.

Was there any rivalry between Hot Gossip and the other 70s dance troupes, Pan’s People and Legs & Co?
No, we never saw each other. And I was doing an awful lot of other work as well as with Hot Gossip.

Do you have kids?
I have a 29-year-old son. He’s a fantastic artist.

Does he approve of you being in Hot Gossip?
Oh yes. I’m a cool mum. I’m the perfect ‘Ab Fab’ mum.

Hot Gossip became national favourites appearing every Saturday night on ‘The Kenny Everett Video Show’. Was he as crazy off camera?
Definitely. He had to be held back. It was a very closed set and he spent the whole time making everyone laugh.

Hot Gossip was formed by former ‘Strictly Come Dancing’ judge Arlene Phillips. Was she strict?
She was quite full on, but I never had a problem with Arlene. Another dancer, Perri Lister, married 80s rocker Billy Idol. And another, Sarah Brightman, married Andrew Lloyd Webber.

Was being in Hot Gossip a backstage pass to a millionaire husband?
Perri was my best friend. Billy was in Generation X then and we were roped into giving the thumbs up or down on all his new songs. I remember him playing us ‘White Wedding’. It was brilliant.

Hot Gossip had its own musical success with the single ‘I Lost My Heart to a Starship Trooper’, which sold half a million copies to reach number 6 in the UK charts in 1978. Who is your trooper?
I have my Mr. Right at home, Christopher. He’s an acupuncturist. He does a lot of work for The Haven (the breast cancer support centres in Fulham Broadway and Herefordshire) who we have dedicated the Hot*Flush show to.

After you flew the Hot Gossip nest, where did you land?
I went into publishing. My boyfriend at the time said, Ali, you have to do something normal. And I had my son to look after. I got a job with Columbus Press. They produced catalogues for organisations like ASTA and ABTA, for all the travel agents, the United Nations and The Commonwealth.

What are you up to now?
I design events for my company, Escape Events. The last one we did was for Pandora jewellery. We do lots of corporate events, loads of parties at restaurants like Hakkasan. We did Jamie Oliver’s birthday, George Clooney’s charity, Not On Our Watch, and Prince Charles and Camilla’s charity, Arts & Business.

Who is the greatest dancer you’ve ever seen?
Sylvie Guillem, the Parisian dancer. She’s so passionate and technically brilliant.

As someone who found fame in the 70s, do you think people are more obsessed with becoming famous than they were?
Absolutely. It’s ridiculous.

At dinner parties, when women with husbands of a certain age find out you were in Hot Gossip, do you ever sense any jealousy?
I do get a lot of attention about it, but I always think, oh no, not again. It takes the conversation away from everyone else.

Do you dance every day?
No. I walk my dog. I wish I danced every day, but I don’t have time.

Thank you, Alison. It’s been lovely meeting you.