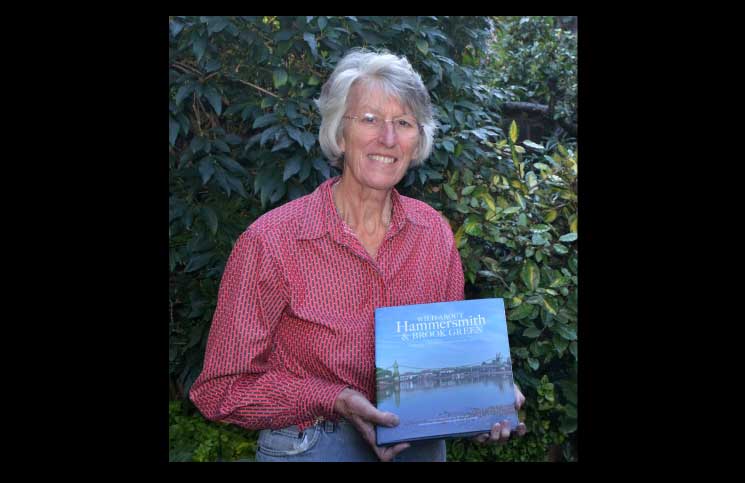 How long have you lived here?

What brought you here?

We distributed children’s books and audio cassettes – just sort of fell into it. It all happened over a gin and tonic – as things do. We met someone over that gin and tonic and they had put all the Peter Rabbit stories on tape. In those days children’s cassettes were sold in record shops, which were very heavy metal and rock. We said, they ought to be in bookshops. One of the first people who took them was Tim Waterstone. And then we went to toyshops and they said, we want some books as well, so my husband said, go and choose a few. We thought we might sell a couple of hundred and a few million later…

As a walking tour guide, you specialise in west London historical walks. How did you get into that?

It’s thanks partly to my husband because he’s a military historian so I know how important archives are for research. About three years ago, there was an ad in the paper; they needed two volunteers at the Hammersmith and Fulham archives and I thought, I have half a day a month. In quiet moments, I started poking about, finding out who lived in my house and when it was built and then looking up things about Askew Road a hundred years ago. One day, Finlay Brewer came to an ABN (Askew Business Network) meeting and they just happened to say, it’s such an interesting history, will you show us around? So, I devised a walk, and people kept asking me for my tour. It just grew and grew. It’s mostly locals, but I love making people look at where they live with fresh eyes.

Who is Askew Road named after?

Back in the eighteenth century, the Askew family came down from the north of England. They made money mainly out of coal and they bought quite a lot of land down here, speculating in Hammersmith and Chiswick. It was mostly fields back then but the arrival of the railways in the 1860s opened it up. London was expanding and it got to about Kensington and here was very rural. Down towards the river was good soil and that became market gardens. Up here were huge orchards, hence The Orchard Tavern, right up to the 1870s. And brickfields. Askew Road was quite a notorious place for pubs. The oldest one was where The Eagle is now. It was originally called The Lady Of The Lake because behind it, from Greenside Road to Lakeside Road, the whole area was brickfields that had all been dug out and it formed a lake. By the 1890s, the area was covered over by houses. I could show you maps from 1870 and by the late 1890s the fields have all gone. The streets weren’t built all in one go. A builder would come along and get the lease of the land and put up probably ten houses. That’s why if you look closely you’ll see they’re not all the same.

Who lived in these new houses?

This area was very much a working class area and a lot of people were doing clerical work. There were already labourers’ cottages for people working the land but the new ones were for people working in town. The maisonettes in Aylmer Road were built for policemen.

And why is Starch Green starchy?

It’s nothing to do with laundry starch. It’s true the big houses of Kensington used to send their laundry here. Laundry was a huge business in the 1890s, 1900s. We’ve still got one laundry left in Jeddo Road. And from here towards Acton was called Soapsud Island. But the name of Starch Green goes back much, much further. On some old maps it’s called Storkes Tenement. And whereas we know Starch Green as the little green at the south end of Askew Road, the older residents think of Starch Green as the bit of road where the Co-Op and the library is.

On old maps, that stretch was called Starch Green and what we know as Starch Green was called Gaggle Goose Green. The name Askew to describe the road came in much later. Some people say the road is sort of askew, but it bends because the original country track cutting from what is now Uxbridge Road down to Goldhawk Road followed a tributary of Stamford Brook and brooks don’t run straight. It still flows underneath and feeds the lake in Ravenscourt Park. It originally went round a moated house in the park. In the mid nineteenth century Askew Road was known as Victoria Road but when the postal system came in there were so many Victoria Roads, they changed the name to Askew Road, after the family.

From what you know of the area’s history, which era would you be most curious to go back in time to visit?

Having been born in the country, in Northamptonshire, I would have liked to see rolling fields. I think it would be quite interesting to go back to the beginning of the Victorian era, to when the first Hammersmith Bridge appeared in the 1820s. That really opened up Hammersmith and would have been quite exciting.

I’m not just saying it but it is Askew. I just love it.

What’s the most scandalous fact that you share with your pedestrian posse?

Ravenscourt Park was owned by Alice Perrers, King Edward the Third’s consort, though consort is a polite way of describing what she got up to. She became a wealthy woman and owned a lot of property. She also owned Gunnersbury. They say that when the king was dying she stole all the rings off his fingers.

Have you had any awkward moments on your walks?

Apart from the unpredictable weather, I do get the odd person who asks just too many questions. My thing is I talk and walk. I don’t give them time. I love having the two-way dialogue but I can’t let one person take over everyone else’s walk.

Do you go for a walk every day?

Mostly. I’d rather walk than take a bus. I walk to the archives and back in Hammersmith Broadway. And it is good for you. I just love walking. I’m not fast, but I’m steady. If it’s a lovely day I think, blow the computer, and I walk down to the river. Because it’s tidal it’s always different. I always try to take routes that avoid main roads. I’m a backstreet walker.

What’s the furthest you’ve ever walked?

Once in France, I set off from where I was staying near Bayeux and I walked north and I got to the sea and had to turn back. It was completely unplanned but I’d walked 27 miles. My husband and I have walked the Thames Path to the source in Gloucestershire, which must be over 180 miles.

If you weren’t a historical tour guide what would be your dream job?

I’d love to have more time to study art and see the art for real. If I could combine that with the walking, that would be perfect.

Thank you, Caroline. It’s been a real pleasure meeting you.

To find out more about Caroline’s guided walks, visit westlondonwalks.co.uk