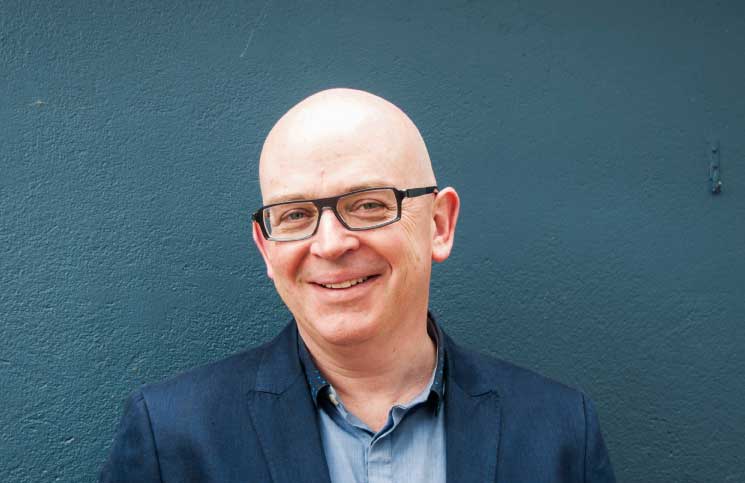 When did you move here?

2000. Before, I lived all over London, from Lewisham to Islington to London Bridge, but my wife Diana lived in Hammersmith Grove. I didn’t know people could live in Hammersmith because I thought it was just a flyover. I remember saying to her, where are the houses in Hammersmith? We’re all hemmed in by towers and roads, like in ‘Asterix’ – we’re the Gauls holding out against the Romans.

I’ve lived in about nine parts of London and this is the friendliest. It’s not just about meeting people through our kids; it’s always been friendly. It was hard to get used to in the beginning, because I’d grown used to nobody talking to each other. When I told a friend I was moving to Hammersmith, they said, go to Camden if you want creative people. I’ve lived in Camden and I’ve lived here and tons of my neighbours here are interesting, creative people.

Where are you from originally?

Was your upbringing religious?

Yes. It was like living under the Taliban, only Catholic.

Did you rebel against that?

No, but my sister did. She became a Muslim. She got married and lived in Saudi Arabia for 24 years. She’s back in Ireland now.

How was that viewed by your parents?

My mother went to church every day, and my dad was the church organist, so I guess not very well.

Were you seen as a traitor for leaving?

No, because so many Irish people leave. But, it was nice coming to a place like London where it was all different people and everything was accepted. It was quite liberating because Ireland back then, in the seventies, early eighties, was quite oppressive. It changed in the nineties when the scandals hit the Irish Church.

How did you catch the drawing bug?

My grandmother and my mother were both artists, and my dad was a photographer before he became a management consultant. I guess it was in the family. Our house was full of paintings. I went to quite a posh school in Dublin – my dad had gone there – but it wasn’t geared up for art, so I went to a Saturday class, which I started when I was eleven.

What got you into animation?

The BBC had a programme about do-it-yourself animation and one episode had Terry Gilliam showing cutout animation. I just loved it. I still have the BBC’s handbook on my shelf. I ended up working with him on the titles of his film, ‘The Imaginarium of Doctor Parnassus’, so that was like coming full circle.

Were you a comic reader?

Yes. My granddad used to get all the American comics and give them to me from the age of five. He was into comic books. There is a different cultural attitude to cartoons here. In France, Italy, Germany, America and Japan, adult commuters read comics on the train but here it’s never crossed over into the mainstream. Or in Ireland. People are embarrassed, which is odd because we’ve got a lot of artistic talent and yet it’s somehow seen as childish.

Who were your favourite cartoon characters?

If someone said they hated cartoons, whose work would you show them to change their minds?

Why did you call your animation studio Voodoodog?

When I set it up twelve years ago with my business partner – he’s got a great name, David Z Obadiah, like a prophet from the Bible – we were in a panic for a name so we just named it after a cartoon character. Once, an American client thought we were into black magic.

What work does Voodoodog do?

A lot of film title sequences. One of our first was ‘The Life and Death of Peter Sellers’ for HBO which got us an Emmy nomination. We’ve done a lot of kids’ movies’ title sequences like ‘Nanny McPhee’. We’ve worked with directors like Edgar Wright – on ‘Scott Pilgrim’ – and Mike Newell – we did ‘Love in the Time of Cholera’, the Javier Bardem film about Gabriel Garcia Marquez’s classic. And we do commercials. Since the banking collapse, people want to appear more friendly. Before the collapse, commercials looked so extravagant. There’s a simplicity with communicating with a drawing. At the moment animation is in fashion for corporate communication and social media. We also do games for the iPad. But we try to do our own projects in between. We’re currently developing an animated film based on Tchaikovsky’s ‘Swan Lake’. It came about through our neighbour, Christina Arestis, a Royal Ballet dancer. People think ballet and classical music are highbrow but we think animation will show that it’s just a beautiful and moving story.

Do you prefer drawn animation or computer generated?

My preference is for drawn and stop-motion. I like puppet films.

Are they prohibitively slow to make?

It is slow. You have to be very careful with planning everything out with storyboards. ‘Swan Lake’ will be stop-motion. It’s a harder sell because everyone is used to the (computer-generated) cookie-cutter style, but that’s become a bit samey. From a financial point of view, the producers like it because they know they can get a film done in a year and a half whereas something like ‘Wallace & Gromit’ takes more time, but it stands out. (The Iranian animation) ‘Persepolis’ stands out. That was hand-drawn and black-and-white. That’s brave, because a lot of kids won’t watch black-and-white. My boys will only watch the colourized ‘Laurel & Hardy’ versions.

If it’s such a laborious process, why not just make films?

I’ve never really been interested in making documentary or reality-based films. I like horror because of the imagination involved, but most films are limited. Animation allows you to do anything or go anywhere. You start with nothing – a blank screen, or blank page if it’s hand-drawn or an empty studio if it’s stop-motion. Nothing appears for free. With a camera you can roll it and do a Mike Leigh improvisation like ‘Mr. Turner’. You can rehearse for eight months and cut it together and everyone thinks how wonderful the script is, but with animation nothing will happen unless the animator makes it happen. There’s no cutting corners or cheating. I like that discipline. I like the process. What some would find boring, I find enjoyable. I guess I’m a control freak. I guess I want to control an imaginary world. Trouble is, it doesn’t always work in real life.

Why is animation considered the poor relation to live action?

Live action is seen as real, serious and only serious things are taken seriously. Some people think animation is only for kids, just like comedy is seen as the poor relation to drama and yet comedy is harder to direct, to get the timing right.

Now that you’re a father of twins, does it give you a double excuse to be a kid again?

I now appreciate a lot of the films I’d written off, like ‘Planes’ or ‘Cars’, which I dismissed as derivative but, seeing them with five-year-olds, you start to realize they’re very clever and perfectly aimed at the age group. So, I’ve learnt not to be so sniffy.

They give me critiques. They read a lot into things that I didn’t think they’d get. I think it’s good for them having a dad who’s into art and painting. And they’re quite competitive with me. I drew Mary Poppins once for one of them and he scribbled it out and said, it isn’t right. He’s already acting like an art director. I draw with them. We do improvised drawing games where one person draws a scribble and the other has to make a picture out of it. They love it. I love it. It gives me ideas.

Thank you, Paul. It’s been a real pleasure talking to you.