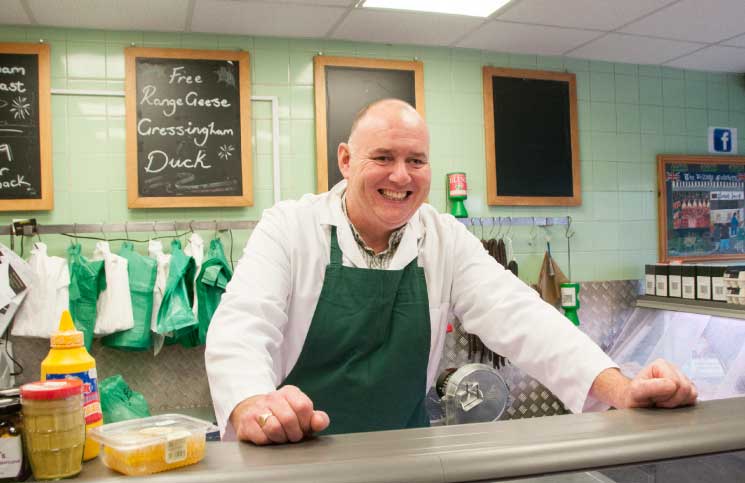 Were you born here?

No, in Wandsworth, but we moved here when I was eleven. When I left secondary school at fifteen, nearly sixteen, my first job was in a local butcher called A. Richards and Son in Merton Road.

Why did you choose to become a butcher?

When I was at school I did a day-release work experience on Farringdon Street near Smithfield Market, where they showed you around the market and you learned how to make sausages. It was something I really liked. I’ve always wanted to be a butcher. I lost my dad when I was quite young and it was important to me to go out and get a job and do the best I can for the family. I’m the youngest of seven. I was probably a mistake, but there you go. I was always chatty and what suited me was being up the front talking to customers. Whether it’s luck or whatever, people seem to take to me and I get on with people quite well. I don’t judge people.

Do any members of your family work with you?

It’s a family business. There’s Danny, my brother-in-law, who opened the shop in the first place. He’s married to my sister, Sue, who works here on Sundays. My niece, Nicky, works here all week. So does my nephew, Jack. And my son, Terry. He’s named after me. It’s a family tradition.

Does he call you Terry?

He calls me Pups.

How did you end up in this shop?

When I left A. Richards, I went to A. Stringer’s in Battersea and he had 8 or 9 shops. I learnt a lot of butchery there and I had my first chance of running a shop. Then Dewhurst offered me a job and I worked for them quite a long time in quite a few places, Brixton, Belgravia… In Belgravia, there was a lot of telephone orders for deliveries and we had to keep the customers’ names secret – we didn’t serve many people who actually came into the shop. It was a bit like Downtown Abbey. It teaches you different sides of people and how to do things. My boss used to say, you do whatever they want because that’s what they’re paying for. I don’t know if I agree with that, but that’s what it was like. In Brixton, it was a great community, great people. You learn what different communities like to eat. They bought a lot of mutton. People come into the shop now and ask for mutton – we do mutton but it’s hard to get because you have to buy the whole thing and have so much left over. In Brixton, we sold a lot but you wouldn’t sell much fillet steak. People have different tastes. That’s where Dewhurst went wrong – they got a lot of things right – but they used to have window plans so wherever you were, they had the same window. That’s fine if the manager’s sick and a seventeen-year-old boy needs to lay out the window, but horses for courses, it doesn’t always work when they do the same window in Brixton as Belgravia. I think Dewhurst were okay because they were ahead of their time in terms of hygiene. I learned a lot about how to keep things clean and tidy and up to a certain standard.

How long does it take to train a butcher?

I’m still learning. People’s eating habits keep changing. The chefs have done us a big favour because people trust butchers again. People want to know where their meat comes from and how to cook it.

Where do you get your meat? Is it local?

Quality is the priority over local. It’s not as if there are a load of farms in London. We’ve spent a long time trying to get it right. We use Packington’s Free Range in Burton-on-Trent for our pork and poultry. We use Scotch beef, Aberdeen Angus. We’re members of a club and they guarantee the farms because we can’t inspect them all. They guarantee to hang them for at least 21 days.

Is hanging worth it or is it just PR BS?

One-hundred-percent worth it. People say beef doesn’t taste like what it used to and that’s because it’s too young. If you have a rare steak and you cut it and all the blood runs out, that’s because it hasn’t been hung properly.

Mince is a good seller. For a Sunday roast it’s seasonal: beef or pork in winter, lamb in spring and chicken in summer, though chicken’s always a favourite. When I was young, chicken was the beef of today; people didn’t have it often because they couldn’t afford it. When supermarkets came in, they pushed cheap chickens so we could all eat like kings. Now a good chicken is as expensive as a lamb and that’s right because that’s what it takes. With a proper chicken you get more meat to bone. Yes, they’re more expensive than a supermarket chicken but you get three meals out of them. And, of course, sausages are good sellers. You’ve got to get them right. You can’t just chuck anything in the mince. I have a thing about sausages. I’ve made thousands and thousands. We try and change them. We’ll be bringing the Christmas stuff out soon. In the summer, people like a hotter sausage. Our hottest is our jalapeno. Six years ago I hadn’t heard of jalapeno peppers. All of a sudden everyone was talking jalapeno. I try not to make them too strong. We did a charity thing this summer, a barbeque outside the shop. We did various sausages and people voted for the “Southfields Sausage”.

It’s a nuisance. Instead of rusk, the breadcrumbs, we use a toasted rye bread and dry it in the oven to make it into crumbs. We use that with pork and chives. It’s delicious but the Polish baker where we got the rye bread, they’re not doing them any more, so now I have to buy twenty loaves and toast them… But people like them.

Pork. Belly of pork or shoulder.

Is there any meat you don’t sell?

I won’t sell a suckling pig because it’s cruel to take them away from their mother. People come in and ask for foie gras (goose liver pate), but we won’t sell that. I’m still an animal lover and I think animals should be treated right. I won’t treat them wrong to get cheap meat.

Are you under constant threat from supermarkets?

I think there’s space for us both. Many people are anti-supermarket, but most of the people who come to us do their weekly shop in a supermarket and come to us for their meat. I always say, quality is remembered long after price is forgot. Three weeks later you’ll still be thinking, that was a great steak.

In the 39 years you’ve been in Southfields, how has it changed?

It’s always been a nice area, simply because Wimbledon tennis is round the corner. The tennis always seems to make sure everything stays right because Southfields is the main train station.

Has tennis given the area a sense of fair play?

Yeah. Even when I was growing up you’d see in the weeks before the tennis, the streets were cleaned. It’s not only the tennis. We’ve got nice schools round here. We supply their meat. Most schools get their meat cheap from a council supplier but the schools around here want us, which is great. We have a little community here and we try to support each other. Another thing that’s changed is a lot of men come into the shop, the dads with the kids. It’s nice.

You’re open seven days a week. When and how do you relax?

If you weren’t a butcher what would be your dream job?

Are you a good cook?

What’s your favourite sort of restaurant?

I don’t do fancy. I like an Indian or a Chinese because it’s something different. I don’t want to sit down and have a steak and be comparing.

Being a face on show on the “high street”, do you feel obliged always to be on best behaviour?

Thank you, Terry. It’s been a real pleasure to meet you.