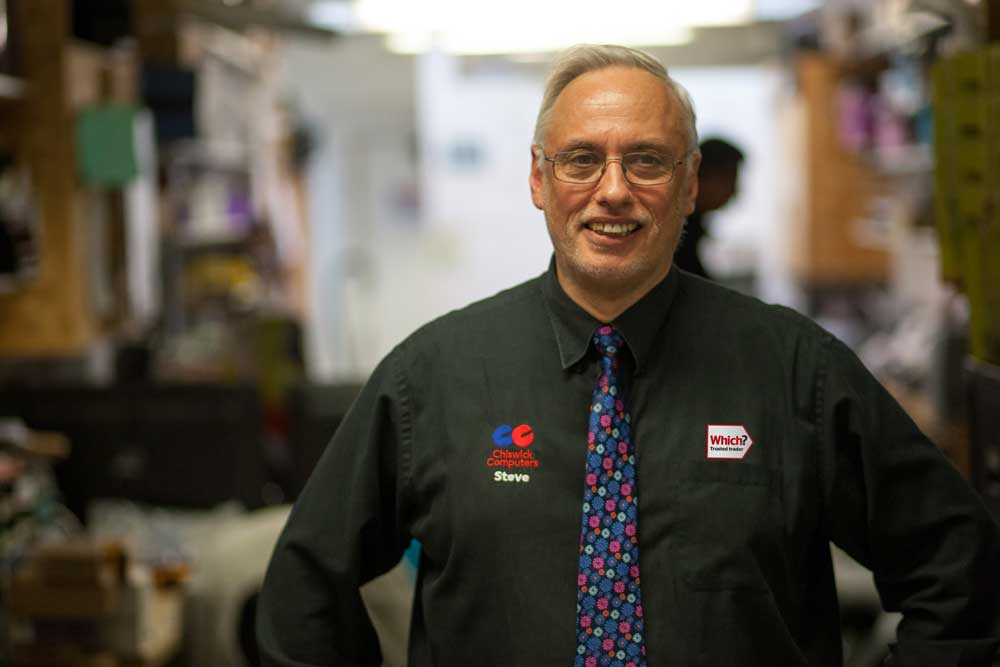 Do you have an issue with an Apple iMac, MacBook, iPad or iPhone? Chiswick Computers has the knowledge to help

‘I went to Chiswick Computers with a damaged screen on a MacBook Air and they sourced and fitted a refurbished screen at a fraction of the price of a new one from Apple.

However, even more impressively, they managed to resurrect a MacBook Air over which I had spilled wine two years earlier – and which Amsys had failed to repair. After two years lying dormant, Steve soon got it up and
running!’ – Ross A, Chiswick

Steve Bonnici and his team are the local Apple experts. ‘When it comes to tracing and resolving faults, experience
is our best asset. There aren’t many problems that we haven’t tackled,’ he says.

‘Liquid spillages of all kinds, cleaning out dust, smashed screens, replacement hard drives, you name it… Once we opened a laptop and it was full of fried insects and dead lava!

‘Failing graphic chips are quite common with Apple: we strip out and replace the graphics chip rather than
taking the pricey option of replacing the motherboard. Also, new batteries for Apple MacBooks are expensive and
sometimes hard to get hold of – it’s often a five-day wait and they cost about £200. We’ve used the same third party supplier for 20 years and we can usually get them next day for around £99.’

Steve estimates that 50% of his business now comprises Apple machines. ‘If you take a faulty computer that’s under warranty to the Apple store, they won’t repair it. They are what we call a “swap-out” company,’ he explains.

‘You’ll possibly be given a previously repaired part. Also, Apple won’t back up data. Often clients ask us to recover their data, they then get their hard drive ‘swapped out’ by Apple and come back to us again to restore the data.’

All Apple repairs are done by Steve’s expert in-house team – they also do home visits – and they come with a no-fix, no-fee guarantee. And one thing’s certain – you will understand what they are doing. ‘We make sure we keep
customers informed of progress and we always explain everything in plain English!’