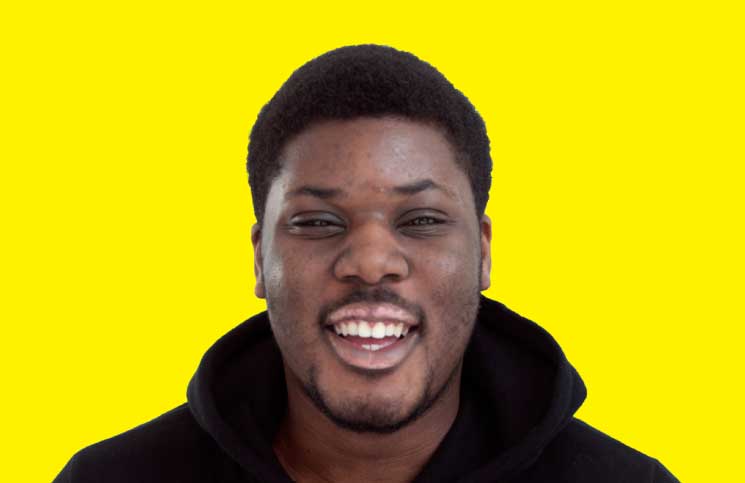 HIS WORLD’S A STAGE

The Lyric re-opened with the hit musical Bugsy Malone. One of its cast, Hammed Animashaun, takes time out of rehearsals to discuss youth theatre, Heath Ledger and fishnet stockings

Q. What first attracted you to acting?

I’ve always loved performing. As a kid I did my best to make my mum laugh doing voices and stuff like that. I enjoy being the funny guy – the class clown. My drama teacher at secondary school saw that I liked performing and making people laugh, so she encouraged me. She could see I was at home in a drama class rather than a maths class. I got kicked out of school.

Q. Where did you learn your craft?

From 11 to 16 I attended classes at the Half Moon Young People’s Theatre in Limehouse.
I performed in kids’ shows. It just kinda went
on from there.

Q. What productions have you worked on?

My first big play was Mogadishu, by Vivienne Franzmann at the Lyric and the Manchester Royal Exchange Theatre. I was Aladdin in Aladdin here in panto. I was in Cinderella as one of the ugly stepsisters.

Q. An ugly sister! Did your friends give you a hard time?

They tried to. I was very nervous during Cinderella as I didn’t know what I thought about the part…

Yes, I didn’t know how I felt about that. I have nothing against it, you know…

Q. That’s the point of an actor isn’t it?
Pushing yourself? Into tights if needs be?

I was very nervous. But during the run I got very comfortable with fishnet stockings.

Yeah. I remember going for the costume fittings. One of my costumes was a Lady Gaga meat dress. It was quite short. You know the famous meat dress that she wore to one of the music awards. I remember speaking to the costume designer and I was saying, “This is wrong. I can’t do this”. And he was like, “No, no, no. You’ll be fine”. I was still very nervous about it. But during the run I can remember going up to some of the costume people and saying, “Can you make the dress shorter. I really want it to be shorter”.

Q. Is that the best part of being an actor? You can do whatever you want and be free?

Yes, especially in certain types of dramas and performance roles – Pantos. They just give you licence to be crazy. Acting can take you outside of yourself and you can just play. Having the ability to be able to ‘become’ somebody else and just play with the character is really fun.

Q. Which actors do admire most?

Aml Ameen (The Maze Runner). His drive and his talent are just beyond crazy. For him to do the things that he’s done here in the UK, then to be able to go overseas and do what he’s doing over in the States – I just think that’s very inspiring. Not many people realise the things that he’s done for young black, British actors who want to go overseas and work. John Boyega (Attack the Block, Star Wars VII) is another one. I think the work that he has done is second to none. In the first big Star Wars VII trailer, he is the first face that you see playing a storm trooper. That’s a milestone. Idris Elba is another actor I admire. I want to get to that calibre of talent.

Q. Whose film performance blew you away?

Heath Ledger as the Joker in The Dark Knight.

Yeah. The first time I ever saw The Dark Knight, especially the interrogation scene in the police cell. I was like… that was something else. It was a masterclass in acting. It took you to another level. You can see the power of acting when actors are that good. Yeah. It was scary. That is one of my favourite films, because of him.

Q. What TV or film role would you most like to play?

Q. How can a young person find out if theatre is for them?

I always say go to youth theatres because they have a passion that some older performers don’t have anymore. I remember a couple of years ago there was a youth festival at the Ovalhouse Theatre, and I went to see a few plays there, and I’m telling you… those plays were so good because the young people were so focused and passionate about what they were doing. It just felt… this is what theatre is about. If I was going to say: You can only see three plays, I would say see God’s Property, by Arinze Kene, because that did change my whole perception of theatre. Another play would be Three Kingdoms, by Simon Stephens. That changed me. Again it changed everything I thought theatre was or what theatre was supposed to be. Actually, I can’t give a third one because those two are enough.

Q. How can young aspiring actors get started today?

There are a lot of different schemes for young people. There’s the National Youth Theatre, Ovalhouse, Half Moon Theatre (Limehouse), Stratford East Youth Theatre. The Lyric Young Company (re-opening this month) at the Lyric Hammersmith.

Q. Why the Lyric?

The events here at the Lyric Hammersmith, even before the new development were amazing with the Choir and The Comedy Club. It was wicked. Now we have the extension with all these new different facilities: a studio; a TV studio; a cinema; and lots of great things. The Lyric is probably going to be one of the best buildings for young people in London. So, if you’re really passionate about music, film, TV, theatre… then the Lyric is the place to be.

Q. Are you looking forward to Bugsy Malone?

Oh yeah. I’m really enjoying it. At first I was a bit nervous. I’m not going to lie.

Because I never thought I’d be able to do it.

When Sean Holmes, the Lyric’s Artistic Director, asked me to be a part of it, I said. “Really? Are you sure?” He had a great new interpretation of the musical and he wanted me to be a part of it, so I said “okay!”. Going into the first day of rehearsals and the read-through I was still very nervous because you have all these kids that are extremely focused. And when I was their age I was not that focused.

Q. So you were intimidated by the younger kids?

Oh yeah absolutely. Some of those kids in there are too talented. I’m scared they’re going to take my job soon.

Thank you, Hammed. Break a leg.
Now where did I leave my fishnets…