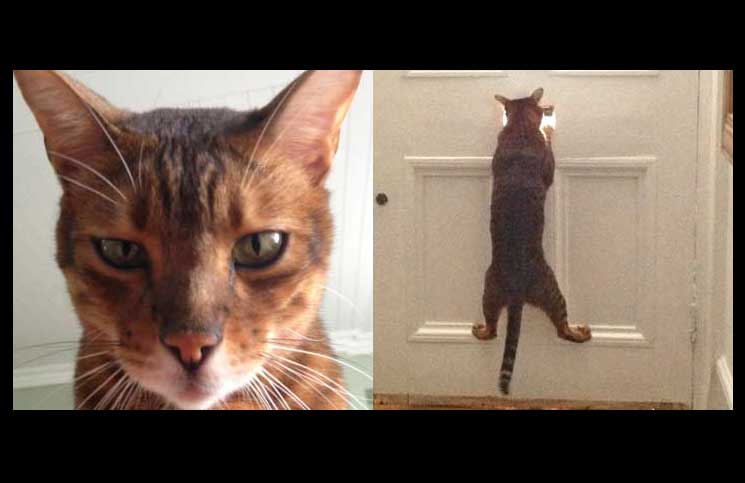 What’s your name?
Darjeeling.  You know, as in the tea grown in the mountains of Northern India.

Have you ever been to Bengal?
For the record, seeing as you’re taking notes, since 1947 Bengal has been split into West Bengal and to the east, Bangladesh.

So, have you been to Bangladesh?
Are you insane?  Have you seen the crowds?  No, old chap, I prefer a much gentler life.

So, you see yourself as a gentleman.
More than that, I see myself as an “aristocat”.  I never knew my father, but rumour has it he was something of a supercat.  In 2008, he won best of breed in the cat version of Crufts.  Then he became something of a stud.  Way to go, daddy.

Have you been spayed?
Are you saying I have a high voice?

Do you have a girlfriend?
Well, there is a white Persian round the corner who’s rather caught my eye, but a gentleman doesn’t rush.

So, you see yourself as a gentleman, but are you a gentleman thief?
I beg your pardon.

We’ve heard that you steal.
From whom?

So, it’s true?
I don’t know what you’re talking about.

Are you a cat burglar, yes or no?
For the record, I don’t do it for the money.

Is that a yes?
I don’t see myself as a thief because I take…  to give.

To charity?
Charity begins at home.  No.  I give it all… to him.  The traitor.

What have you taken?
It all started when we lived in Kensington.  I fancied a treat and he wasn’t getting the hint.  So I went hunting.  In a neighbour’s apartment – she’d left the window ajar – on the windowsill I spotted some binoculars – well, more like opera glasses actually.  As I speak, she’s probably in the Albert Hall squinting at the stage.   Anyway, I laid them at the feet of the lord and master, but still he didn’t get the hint.  So I tried again.

What else have you stolen?
Look at the photos, man.  It’s all innocent stuff, mostly stuffed toys.

So, you steal from children?
They need to learn it’s good to share.  And I love that dolphin.  I’m particularly proud of the counting rings.  They’re all numbered.   I took them in the right order, one day at a time.

What else?
I’ve borrowed quite a few clothes.  There was a hat.  A red bow tie.  And some socks.  A pair of knickers.  And a suspender belt.  Oh, and an egg.  It was pretty tricky getting that through the letterbox, I can tell you.

What’s the biggest thing you’ve ever taken?
I “borrowed” a one-foot high stuffed toy owl.  I had to leave it outside because I couldn’t get it through the letterbox.

And the most valuable?
I brought home a velvet pouch. And inside was a silver bracelet.

Where is it all?
Ask him.  The traitor.

So, he’s your fence?
Don’t be silly.  He gives it all back.  Or tries to.  I watch him, walking up and down the streets, knocking on doors, asking people if they’ve lost any underwear.  They must think he’s completely doolally.  He should be locked up. I am.  Well, as good as.  He’s had me tagged.  I’m as good as  under house arrest.

Thank you, Darjeeling.  It’s been enlightening talking to you.