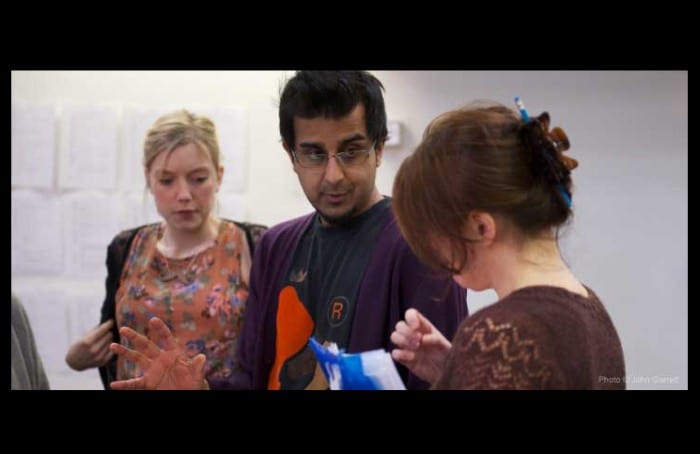 Madani Younis, artistic director of the Bush Theatre since 2012, tells Jo Reynolds about the theatre’s new home in the old Shepherd’s Bush Library.

What brought you to this neighbourhood?
I’ve known the Bush (theatre) all my professional life. I knew it when it was above the pub (in Goldhawk Road). My mum, who’s West Indian, used to come to Shepherd’s Bush Market. There’s something about Uxbridge Road. It represents the best of London. This area is a microcosm of what London can become.

What drew you to the theatre?
My mother was an English teacher and I grew up reading. I read Seamus Finnegan when I was 16, his work about the Troubles in Ireland. It felt so immediate and unflinching. It was such an arresting experience. I believe the theatre is a motor for social change. It can shorten the gap between art and life.

Why directing? Are you a natural leader?
I’ve always written and directed. I enjoy collaborating with other members of my team. Being an artistic director is a form of cultural expression and I feel privileged to be doing it.

Are you bossy?
I’m honest!

What was the first play you directed?
In 2002, I directed ‘Streets of Rage’ in response to the Bradford riots of 2001. It played at the West Yorkshire Playhouse in Leeds and in Bradford.

What’s the theatre’s mission?
For 40 years it’s been the home of new writing. It allows the best voices to have a start. It’s always been the theatre not afraid to ask big questions.

Are you too serious for musicals?
No. ‘Josephine and I’ (which ran last year) comprised live music.

Your website claims 35,917 people visited you last year, 13% were under 26, 61% were visiting for the first time and a third was local. Do you target a particular audience?
We can be a theatre for some of the people for some of the time. The diversity of our programming allows us to speak to different people, to speak directly to the community of Shepherd’s Bush. A third of our audience being local is no accident. We invite all locals to become a “Bush Local” to get free access to information and discounts. I want this building to feel like part of Shepherd’s Bush.

In your experience, is Britain more or less culturally diverse than when you started exploring its culture on stage?
What a question! We have a lot of exciting artists rewriting culture form another vantage point. I’m really excited we have another generation staking their claim. We live in difficult times but I can’t help but be inspired by young artists being brave and ambitious. Our culture feels so rich. Our challenge is to enable its expression.

If you met someone who said they hated the theatre, what play would you encourage them to see to change their mind?
If you doubted the power of the theatre, I’d invite you to watch ‘Josephine and I’. It was thought provoking and inspiring – a beautiful, beautiful play. Often people are self aware of the perceived etiquette of going to the theatre. I understand that but this is a democratic place. We are merely custodians of this building.

Do the pressures of live performances lead to many tantrums in your theatre?
No. Of course there’s a vulnerability. We produce new work and have to negotiate the unexpected every time, but we work together. As the cliché has it, we’re all on the same page.

Do you have any special tricks to keep your ship calm? Like donuts?
Always inviting opinion. Being transparent. Giving a clear sense of the direction to be travelled. The theatre isn’t a 9-5 job.

How do you handle the hours?
The biggest asset to the theatre is the people who work in the theatre. We have a great team, with a real spirit of camaraderie. 9.30 to 11 at night, sometimes later, is a long day but we stay open for a lot of people, the students who take advantage of our library of plays, for local businesses to hold meetings in the café. I think it feels like a hub here. The psychogeography
of the place means that people remember when this was the public library and when they walk in they feel instantly at ease.

What’s on at the theatre now?
Our current show is by the American playwright Jackie Sibblies Drury, ‘We Are Proud To Present…’ (which runs till 12 April). It’s a play that takes us in a different direction, a very purposeful programme choice. Globally many people are commemorating the start of the First World War but what Jackie has done with the play is to look at history from the ground up.

What’s coming up?
‘Incognito’ (4 May – 21 June). Nick Payne is a beautiful writer who can tackle the most complex subjects. I cannot wait. It will be a beautiful, beautiful show.

Thank you, Madani. It’s been a real pleasure meeting you.

To find out more about the Bush Theatre visit www.bushtheatre.co.uk