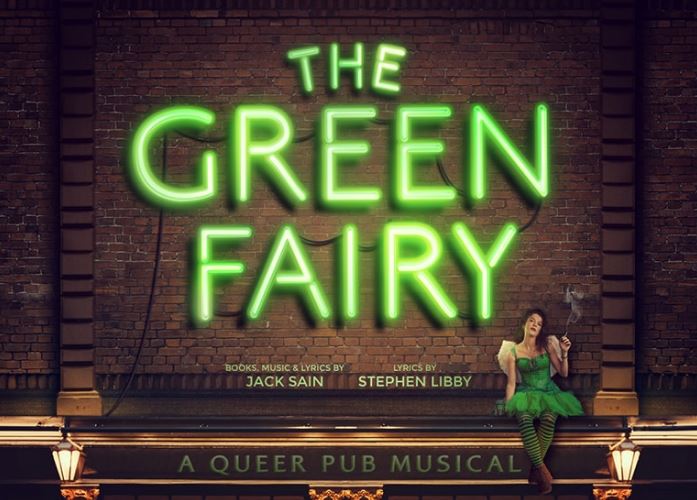 As you walk in you are struck (not so literally) by dangling bottles of alcohol hanging from all sides of the stage. Bottles which loom over the characters throughout, a metaphor for alcohol as a constant presence and a burden as alcoholism in the main character is pursued as a main theme. And plainly, it looked cool. There was a beautiful use of lighting: colours; shadows and spotlights – cleverly used to differentiate between moments of past vs present, bringing you in an instant into a wonderful new world of flashback.

“The Green Fairy” pulls you into a story which is touching, with brilliant moments of comedy that contrast hauntingly with the darker integral themes of the play. Writers Stephen Libby and Jack Sain who also doubled as director, do a great job of highlighting and creating a delicate and detailed blend of both some of today’s most relevant themes in theatre as well as the classic battles of humanity, such as addiction, sexuality, family, dissatisfaction, broken dreams and expectation vs reality.

I found that Julie Atherton in particular defined her talent by embracing all these moments of humour, allowing an enjoyable lightness to Jo’s at times dark and gritty character arc, as the narrative follows her retrospective gaze back through her life with the aid of the “Green Fairy”, played energetically by Georgina Hellier.

The musical element, both instrumentally and vocally, was excellently written, and gleamed with a touch of emotion, just enough for the audience to easily buy into the sphere of the magic which is taking back control in one’s life. More practically, the songs also paved the way for progression, drive and clarity in the narrative. The use of the many instruments such as guitar, piano, violin, and even the bar-drum to keep rhythm, created an illusion of matrimony between stage and seat, between actor and spectator. I’d say I was made a witness to an all-surrounding and strong sound – if sound were visible.

I would definitely urge anyone to catch a drink at the pub, and then this show in time for it’s late November finish (and in that order). Before it’s too late.